International acclaimed poet, cultural organizer, and social justice activist. As a writer and performer, they create narrative poems and essays on migration, queerness, feminism, climate change, and nostalgia. Often collaborating with filmmakers and visual artists. Born in Ecuador (proud Kichwa-Kañari), at the age of 5 they migrated to the United States to reunite with their parents in NY. In 2007, Guiñansaca came out publicly as an undocumented immigrant.  They emerged as a national leader in the migrant artistic and political communities where they coordinated and participated in groundbreaking civil disobedience actions. Guiñansaca co-founded some of the largest undocumented organizations in the U.S, including some of the first artistic projects by and for undocumented writers and artists. Since then, Sonia has worked for over a decade in both policy and cultural efforts building equitable infrastructures for migrant artists. They have been awarded residencies and fellowships from Voices of Our Nation Arts Foundation, Poetry Foundation, British Council, and the Hemispheric Institute for Performance & Politics. Guiñansaca has performed at the Met, the NYC Public Theater, Lehmann Maupin Gallery, El Museo Del Barrio, Brooklyn Museum, Galeria De la Raza, The Nuyorican Poets Café, La Mama Gallery, toured campuses across the country, and has been featured on PEN American, Interview Magazine, Latina Magazine, Ms. Magazine, Teen Vogue, Diva Magazine UK, CNN, NBC, and PBS to name a few.  Their migration and cultural equity work have also taken them to London and Mexico City to advise on migrant policy and arts programming. They are now a consultant to national cultural institutions, philanthropic foundations, and multi-media organizations on cultural activations, artist development, and content production. They serve as the national advisory Board Member of the Laundromat Project in NYC. Guiñansaca self-published their debut chapbook Nostalgia and Borders in 2016. They are the co-editor of the forthcoming anthology Somewhere We Are Human (Fall 2021 HarperCollins).  Guiñansaca is launching Alegria Press, a publishing house for Queer, Trans, Non- binary, and migrant undocumented writers in Spring 2021. 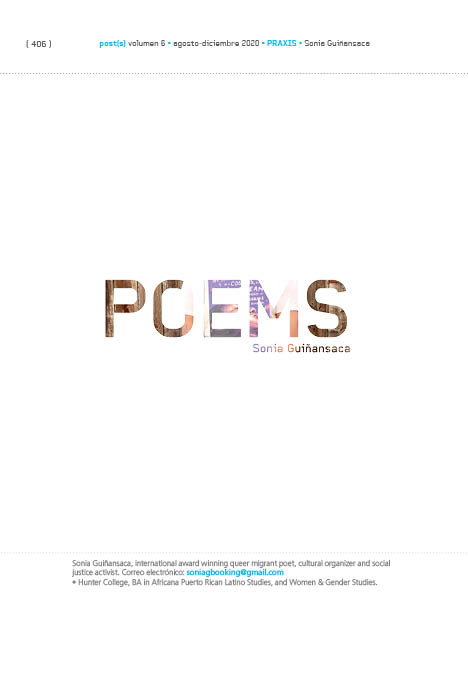